Purely Green Bio-Pesticide is a new broad-spectrum pesticide proven highly effective against most insects ranging from household fleas, flies, mosquitoes and wasps, to a multitude of crop-destroying insects and fungi.

Unlike other pesticides, it does not attack the nervous systems of insects, humans or animals. Rather, it penetrates and dissolves the protective chitin surrounding negative insect cells.

It is harmless to humans and animals and has been observed safer for desirable insects such as honey bees, ladybugs, etc.

It is a U.S. EPA Exempt, low risk, non-restricted bio-pesticide, which can replace 1,000’s of toxic insecticides.

One gallon protects 42 acres for as little as $3 per acre per application.

It features 5 modes of action. 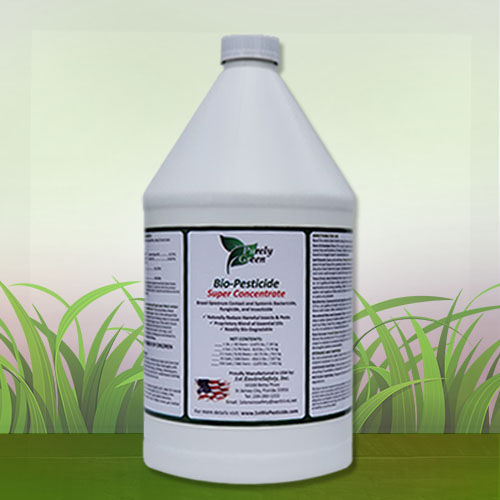 First, it quickly penetrates most soft-bodied insects such as fleas, fungi, mealy bugs, nematodes, spores, ticks, and wasps. It dissolves their cellular structure, resulting in death.

A second method for insects such as aphids, grasshoppers, roaches and hard shelled beetles is to penetrate and dry the lubrication of their exoskeleton joints. The crippled insect dies of starvation.

A third method: Purely Green incapacitates flying insects like white flies, mosquitoes, wasps, etc. by penetrating and dissolving the waxy coating of the insects’ wings. It also dries and paralyzes the exoskeleton wing connection to the body.

A 4th mode of action is suffocation. The tiny particles enter via the insect’s spiracles and dissolve the protective chitin of the tracheae cellular structure. The insect suffocates.

It can be applied via foliar or systemically i.e., soaking the plant roots. The plant absorbs and transmits Purely Green to the leaves where it is ingested by the insect.

The combination of multiple modes of actions leaves the pest little to no chance of survival.

Death usually occurs within minutes for most insects, however with some of the more hardy bugs such as aphids, it may take several days. Some eggs may survive; therefore, repeat applications should be applied based on the reproductive cycle of the pest.

Its ingredients were clinically documented as Mutagen Free (non-cancerous) and Genotoxicity Free (“Harmless to Human and Animal cells”). Lab reports available upon request.

It is the solution to a worldwide health hazard: It is destined to replace millions of tons of toxic pesticides permeating our food, water, and air.

Why not start in your home and on your farm?

NOTE – The benefits of this superior advancement are not yet available to residents of : Alaska, Alabama, Connecticut, Illinois, Indiana, Louisiana, Maryland, Maine, Mississippi, New Mexico, and S. Dakota.