Growers are receiving generous, well-deserved financial profits while feeding millions of people all over the world.

It happened accidentally; some say by Divine Providence.

It began in 1997 when Dr. Ted Tidwell, Pine Island, Florida, began a quest to develop a carcinogen-free cleaning solution.

It took five years of research and testing but he finally developed a cleaner believed to be the only known effective cleaner completely free of known cancer-causing chemicals.

Homeowners expressed delight with their newfound ability to keep lawns green and lush during the winter dormant season.

Plants and trees, after being sprayed with Bio-Wash, experience an accelerated level of photosynthesis activity. This is most likely attributable to the small size of the cleansing molecules, which allows them to enter the stomata of a plant’s leaves, making them more efficient in utilizing the energy from the sun. Photosynthesis is the process by which plants utilize the energy from sunlight to produce sugar, which is converted to form the basis for the starches, cellulose, waxes, carbohydrates, oils, and protein that are the building blocks for all plant growth.

During photosynthesis, the leaves of the plant or tree use water and release the oxygen, which we breathe. The leaf is a solar collector crammed full of photosynthetic cells. In essence, water and carbon dioxide enter the leaf and sugar and oxygen exit the leaf.

When applied to bare rootstock, before planting, or after saturating the root structure when in place, Bio-Wash acts to stimulate new growth and development by dissolving NPK from the roots, thereby enhancing nutrient uptake. It also provides an element of nutrition when it is applied to the leaves, where it enters through the stomata and is accepted directly by the plant.

A second factor that contributes to these results is the presence of sodium in Bio-Wash. Sodium is a cation, which encourages and stimulates the movement of fertilizers and other nutrients from the soil into the plant itself through its root system. To be more technical, cation is an atom or group of atoms carrying a positive electric charge to which the negatively charged anions are attracted. They attach themselves and hitch a ride into the plant. In other words, NA+ is a charged (sodium) transporter conveying nourishment directly to the plant.

As a consequence of both these factors, the plant grows more rapidly, is healthier, stronger and better able to resist disease. Comparative field tests also confirm earlier and higher rates of germination, quicker flowering, and increased overall crop size.

environmentally friendly, truly “green’ non-polluting product. Made from FDA approved food stocks, Bio Wash is completely non-toxic and non-hazardous. It has a very high bio-based content and is completely biodegradable over a 28-day period.

To better appreciate how Bio Wash influences growth, it’s necessary first to explain some fundamental elements of what contributes to a plant’s health.

A Brief Explanation of Plant Growth

When a seed germinates, it produces an embryonic root (radical) that grows into the soil, in response to the earth’s gravitational field. As new cells are added, the root elongates producing hair roots and lateral roots. The roots remain interconnected, developing a network of living cells throughout the soil. Within the root, the inner cells become specialized to conduct solutes (water + substances dissolved in it) from the root to the shoot (via xylem) and from the shoot to the root (via phloem).

Flow from the shoot to the root is achieved by loading sugars produced in the leaves into the phloem. The sugar-laden solute moves downward, to the sites of lower concentration in the root. The xylem, carrying solute from the roots to the shoot acts like a bundle of capillary tubes, supporting the water in a vertical reservoir. The leaves of the plant actively lose water through pores at the surface (transpiration), drawing the water in the xylem upwards. By this method, essential nutrients extracted from the soil are transported to sites of growth and production in the shoot.

The surface of the leaf is specialized for trapping energy from light (photosynthesis) and storing it as sugars and starch. Therefore, the upper leaf surface must be angled to face the sun, which causes its surface temperature to rise 10 C above the ambient air temperature. To control water loss, most leaves have a thick water resilient waxy layer. The specialized openings that control the rate of water loss (stomata) tend to be more numerous on the underside of the leaf. However, leaves are not ideally adapted for taking up nutrients. It’s the mass flow of solutes from the soil to the roots that provides the greatest amount of nourishment for plants. (The above is a portion of a tract, written by Pam Pittaway, Landscape Consultant, Queensland, Australia).

Because plants sprayed with Bio Wash appeared to be much larger and grew faster than normal, an agronomist in South Africa/Zambia theorized that these factors may have been due to an increase in the level of photosynthesis. To test this theory, several plots of wheat were sprayed with Bio Wash in early summer of 2005, while adjoining plots that served as a control, were treated with conventional fertilizer/pesticide applications. Leaves from plants in both plots were then crushed and the resulting fluid submitted for a Brix meter reading to determine if there were any differences in the level of sugar content. To their astonishment, the plants sprayed with Bio Wash showed an increase of 8% in just a four to five-day period. The owners of the plot and their crop managers considered this “extraordinary.”

To confirm these findings, another series of tests were undertaken, this time in Australia, in late summer of 2005. The subject crop was macadamia nuts. This test was more comprehensive and spread out over a longer period of time. The crops were in different, but adjacent fields. Spraying took place over a four-week period. One control called for spraying to cease after the first application to determine what happened to the sugar content under these conditions. Additionally, a control was set-up to measure a direct comparison between BioWashed and two standard fertilizing treatments involving urea and humic acid, which were substantially exceeded.

These tests, which were more comprehensive, revealed the sugar content of the leaves increased by a factor of 5 within seven days of spraying, compared

with the plants in the adjacent fields. What was even more interesting was so long as the plants were sprayed at 7- or 10-day cycles, the sugar content remained at an elevated 5O%+ level. Once spraying was discontinued, the sugar level returned to normal after about four to five weeks, indicating a direct correlation between the use and non-use of the spray. In the ensuing months, many other crops were BioWashed, all of which confirmed the observations that the plants matured earlier, were larger than usual with increased fruit size and substantially greater yields. This culminated in plantings undertaken in Thailand in early 2006 on two rice varieties in three different provinces. The first report received by the company stated that the seedlings sprayed with Bio Wash “flowered 7 days earlier than that of plants treated by conventional treatment (foliar fertilizer + hormone + fungicides + insecticides)’

And most important of all, total crop yield increased by an astonishing 20%, the crop was also harvested one week earlier than the control. 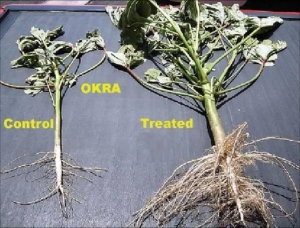 One of the secondary benefits for the grower was Bio Wash’s ability to stop the growth or intrusion of M grisea, commonly referred to as rice blast, a fungal disease that destroys up to 20% of the world’s rice crop each year. This was affirmed by the report. Comparable results were reported from six subsequent Thai rice harvests. 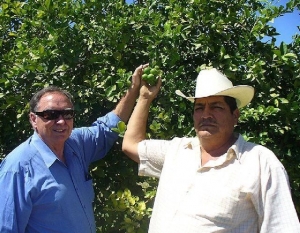 Owner Ted Tidwell holding a cluster of 11 limes compared to the usual 2 to 3.

In the months leading up to September 2007, innumerable other test results on a variety of crops have been received. In Hawaii, an onion crop with a maturity of 120 days was picked, crated and sold in 90 days. In Australia, a number of tests involving plums, nectarines, lettuce, and wheat reported significantly higher sugar content and growth gains along with disease control. In China, an agricultural college reported a 90%+ kill of infestations over a four-day period, while another trial on cucumbers undertaken by the military reported a 90 kill of aphids and other infestations added parenthetically that the crop came in 9.4% heavier. In Panama, a rapidly spreading fungal invasion of coffee plantations was stopped in its tracks. In the Philippines, tests were run on a wide variety of crops, from onions to mangoes to sugar cane, all with positive results.

President Kalam, of India, commented how wonderful it would be if India were able to increase its rice crop by 10%, while at the same time eliminating the toxic poisoning that is affecting farmers countrywide. Rice tests in the summer of 2007 in Turkey and Vietnam confirmed substantial harvest increases, while pictures from Turkish fields showed olives at double their normal size. Major field studies in South Africa

confirmed control of mildew in the vineyards, as well as a number of other corps. And currently, a variety of tests are underway in Korea, the U.S. and several eastern European nations.

This is but a brief summarization of some of the positive benefits to be derived from the use of Bio Wash. 1st Enviro Safety is proud to make available to the agricultural industry worldwide a product that not only solves some of the world’s basic problems affecting crop production but does so at very significant dollar savings for the grower, while at the same time removing the threat of toxic petrochemical poisoning of our environment.